Classic Shoe Repairs is a local family business owned and run by Cheltenham man Dale Midwinter, a highly skilled cobbler with over 30 years experience in repairing shoes. Dale has been determined to keep the family business alive in tribute to his father, the late Don Midwinter, who was a master craftsman in shoe repairs and originally set up Classic Shoe Repairs. Dale continues to use the same traditional methods of repairs as learnt from his dad.

Dale is passionate about recycling and he strongly believes that footware should be repaired rather than thrown away. In the past Dale has repaired running shoes, football boots, trainers, golf shoes, as well as orthopedic and equestrian shoes.

Why Use Classic Shoe Repairs?

Craftsman Don Midwinter is a traditional cobbler. And to ensure his skills do not disappear completely, he is passing them on to his son Dale. 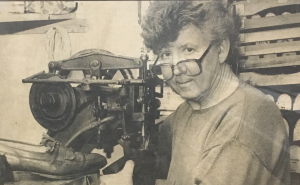 Don Midwinter working with an in-sole stitching machine almost as old as himself.

After more than 40 years in the business of repairing handbags, shoes and boots he is now teaching Dale how to use equipment, some of which dates back to 1936. Cheltenham-born Don, 58, first started to repair
leather goods as a 15-year-old: “Most people in the 1930s used to fix their own shoes, just as my father did. Then he told me I ought to take it up as a job.” he said. For a time he worked for another cobbler and
then he set up on his own. Now he runs a shop in Albion Street called “Classic Shoe Repairs” which resembles an Aladdin’s cave of strange looking implements. 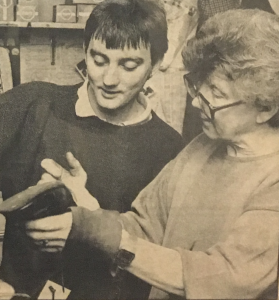 One of them, a driver, is used to hammer nails into shoe soles. Don says: “I have had this for 30 years and you can see how the metal has worn from where I have been holding it.” Despite his experience Don admitted he was still given things to mend which he had never come across before. “Even today, someone brought me a standard bearer’s belt to repair. It’s the first time I’ve ever had such a job.” he said. To do much of the work Don uses powerful stitching machines which allow him to sew two pieces of leather together and then hide the stitching that has been done. “Once you put one of these soles on, you should never need another.” he said.

Because of his reputation people come from far and wide to his shop. “A lot of people come and say they have been all over Cheltenham and can’t get what they want done anywhere.” Among his customers have been several famous jockeys including the flat racer Pat Edery.

His Son Dale said his father had taken him on last year to help him cope with the work, which was pouring in. He said “My dad still has to keep his eye on me to make sure I do the right thing especially when I use the stitching machine.” And when his father retires he will take on the business “I enjoy the work because every job is different.” he said. Not only will he carry on the ancient art of cobbling but also the shop’s motto – “You supply the laces and I will supply the shoes.“